A land of cows and carbon – Morwell

Once known for its fertile soils and productive farms, the Latrobe Valley in Gippsland, Victoria, is now famous (or infamous, depending whom you ask) for producing an altogether different commodity.

Beside the road, forests of power poles lead up to coal-fired power stations. The biggest, oldest and most controversial of all is Hazelwood, about six kilometres outside Morwell.

As I cycled round the bend, the power station loomed ahead like a menacing fortress, its eight tall towers lancing the sky. 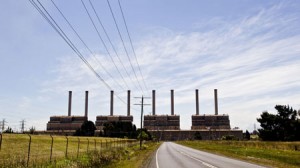 I stood by the road and looked up, thinking about how few people have actually visited this place. Hazelwood provides, by some estimates, up to 25 per cent of the state’s electricity. But have 25 per cent of Victorians – or even five per cent – seen where their electricity comes from?

It’s become almost a cliché to say we’re disconnected from our food, especially people who live in the city. But, when you think about it, a lot of us are also disconnected from the power we use. We plug in our appliances without considering – really considering –the tremendous amount of time and energy and resources that goes into making our gadgets hum. Partly as a result, we squander that electricity, leaving lights on all night, the energy trickling away.

In a few days I’ll finally arrive in Clifton Creek and meet John, a man who knows exactly where his electricity comes from because he generates it himself. I wonder if that makes him appreciate it more, and therefore waste it less?

Would be interesting to find out.

This entry was posted in Environment, Our Journey, Self-suffiency and tagged climate change, coal, electricity. Bookmark the permalink.