Cycling through the suburbs – Pakenham, Victoria

Today I toured what Victorian urban planners call the “Casey-Cardinia Growth Area”, though if you’re from Melbourne you probably know it by the suburbs of Cranbourne, Officer and Pakenham. About 50 kilometres from the CBD, this is one of the fastest growing areas in the state, expected to cram in 400,000 people by 2031.

The sprawl is seemingly endless. Cresting a hill in Berwick, I could see a patchwork of grey tiled roofs spreading into the distance.

When I rode into one of the housing estates, everything looked immediately familiar: tidy brick houses, neat green lawns, shiny cars in concrete driveways. These are the gumtree-lined avenues of suburban Australia, the typical streetscapes of commercial television. A Neighbours sort of neighbourhood. 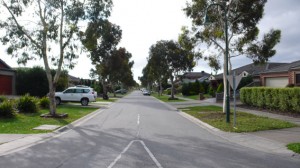 In Australia, millions of people live in houses and streets and suburbs just like this. First home buyers choose a free-standing dwelling with an average 243-square metres of floor space and a $280,000 mortgage, then spend decades paying it off. That’s the norm in our country. It’s the way we do things.

And because it’s the way we do things, I think we can fall into the trap of believing it’s the only way to do things.

In a previous existence, I had a 9-5 job in advertising, adopting some pretty bad habits: staying back late, eating takeaway, drinking every weekend, wasting too much money on useless stuff. I was staring down the decades at a house in the suburbs, if only I could scrape together the funds for a deposit. But the whole idea of living that way left me feeling trapped and unhappy, I’m not sure why. It was only when I met some artists, many of whom lived like modern-day nomads, that I realised there were other ways to structure a life. Their examples gave me the strength to leave my job and try something different.

Now I work for myself as a freelance journalist, mostly writing about environmental issues. Although I still haven’t kicked some of those unhealthy habits – especially working late – I feel free and happy. Or at least more than I did before, anyway.

And so here I am, cycling through the suburbs on the way to visit a man who also chose to sidestep the 9-5 lifestyle. John Hermans built his own house, and now he grows his own food and generates his own electricity so he doesn’t need to work full-time. He’s never had a mortgage or even a bank loan. When I found that out a few months ago, I just had to meet him.

This entry was posted in Housing, Our Journey and tagged advertising, McMansions, urban sprawl. Bookmark the permalink.